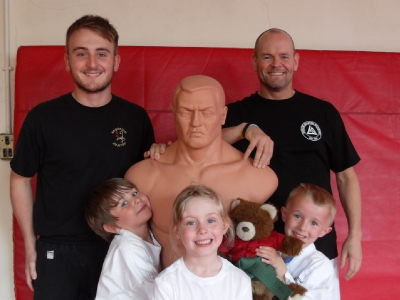 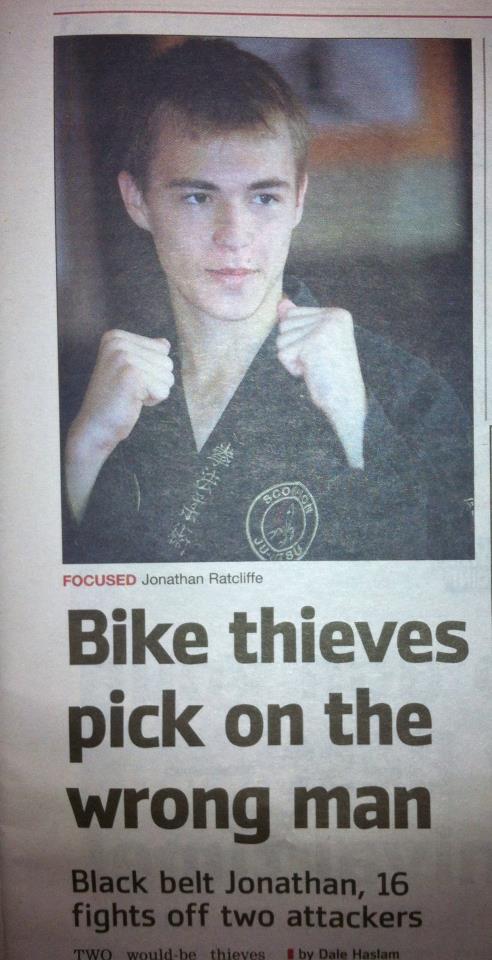 TWO would-be thieves got more than they bargained for — when they picked on a martial arts black belt.

The yobs attacked 16-year-old Jonathan Ratcliffe in Dow Lane, Elton, as we walked his girlfriend home.

They tried to wrestle Jonathan’s bicycle from him, but the Tottington High School pupil stood his ground. After one of the men punched him in the face, Jonathan punched him back and he and his accomplice fled.

Jonathan’s uncle, Steven Rowlands, paid tribute to his nephew for showing such bravery. Mr Rowlands, of Lowercroft, is a tutor at Scorpion Jujitsu, in Victoria Street, Bury, where Jonathan trains.

He said: “I was so angry to think that these lads are out on the street targeting people and it was great that Jonathan was able to fend them off “I mentioned it on Facebook and many people have responded to congratulate him for defending himself.” He added: “Jonathan’s martial arts training definitely came into play and he has used it very well and showed courage. It shows how useful it can be. This is exactly why we teach martial arts to young people.”

Jonathan, who has been training in martial arts for nine years, said: “They came out of an alleyway and I heard one say to the other ‘go and get it’ and I knew what they wanted. One came up to me and tried to get the bike off me and the other one tried to hit me in the face, but I managed to hit him back and they ran off. I wasn’t scared, I was just focused, which is what the training prepares you for.

“My girlfriend was okay. She called the police as it was happening and the incident has now been reported. I think you have to use your judgement in situations like these. I would’ve have backed off if there were more of them or if they had weapons.”

The assault took place at 9pm on May 28. Both attackers were aged about 18, white and were wearing black balaclavas, black shirts and black tracksuit bottoms. The man who struck Jonathan was 5ft 11ins tall and skinny, while the other was 6ft tall with a more stocky build.

Anyone with information should call police on 101.

Well done to Jonny for successfully fighting off two muggers who were hell bent on stealing his push bike on Dow Lane last night. He fought them off, sustained a few minor cuts and bumps, protected his girlfriend and still has his bike. I am extremely proud, he is a credit to himself, his family and Scorpion Ju-Jitsu.